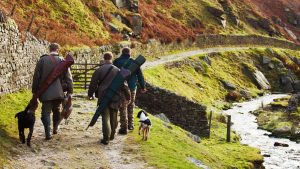 Do you have a pet? Have they been trained on firearm safety? Are your firearms safe from you family pet?

I know that it sounds silly to train your pooch on firearm safety, but honestly, people have been shot by their own pets.

Firearm safety rules also follow with having pets around the house or if you take them out (like hunting). Still not convinced? There are a few stories that I remember some years ago and one that sticks out the most is about a gentleman that was using his boat to do some duck hunting. He brought his faithful friend with him to retrieve the ducks in the water. Things were going well and the pooches owner had his rifle laying on the deck of the floor of his boat and while he was driving across the lack, he was shot.

So how did this happen?

Funny thing happened that day, he left his firearm loaded and when the dog was moving about on the deck, his paw hit the trigger, it fired and shot the dog owner. There are other similar stories out there where the home pet got access to the firearm, it was loaded and accidentally discharged due to the pet hitting the trigger. This person failed the firearm safety rules by keeping a loaded weapon pointing at an object that he didn’t wish to destroy, himself, and the dog didn’t treat the firearm as if it was loaded (poor puppy).

There was another incident where a pooch jumped onto its owner while he was holding a shotgun and it accidentally fired it. There is no firearm rule around a dog jumping up on its owner, but that dog needs training on not jumping up on people.  This type of accident could have been prevented if they had the safety on.  There is another accident where a loaded pistol was on the nightstand, it was knocked off by the dog and he played with it and it fired. So pet owners being shot by their pets is not uncommon in the world. It doesn’t happen that often (if reported), but it does once in a while.