Can You Change the Viewpoint of those Against Firearms

Can You Change the Viewpoint of those Against Firearms 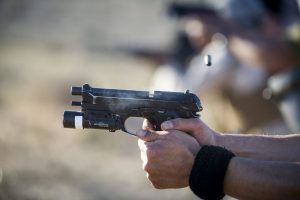 Do you have friends that are against firearms?  Do you try to get them to take your point of view?  Are you getting frustrated by those spewing out misinformation?

Since you are a concealed carrier, you’re going to run into people who are against what you’re doing to protect yourself and your loved ones.  This may be a strange concept for some of you, but there are some who are against people who carry firearms or even own one.  The world has really changed from where a society of people commonly carried firearms (sometimes required in churches), a tool they depended on it to protect their lives and their loved ones in the United States. America was new at that time, most of the country was unexplored and people carried firearms all the time in public. It was the norm and something that was hardly frowned upon since it was part of the culture.

Fast forward from the Wild West to today. Millions of people still carry firearms today, but as a society, it is now questionable and frowned upon by many people. So what’s changed? Has the danger from others or wildlife no longer a threat and we should no longer protect ourselves? Has our nation changed where there is hardly any crime and protecting oneself is no longer needed? For some odd reason, people truly believe that the world is perfect and no one will ever come into harms way.  The mindset is that it only happens to other people, especially to those on youtube under FAILED videos or some other form of media.

Nothing has really changed from hundreds of years ago when it comes to self-defense from those who wish to do you harm.

I hear conversations all the time from people who are experts on why firearms are so bad for our society. Of course, they have little to no experience in firearms, but they truly believe they are the experts because they heard it on the radio, saw it on TV.  Or it was posted on some social media from others like themselves who may have never owned a firearm or who have never gotten training. From what I hear, we as concealed carry citizens, who have saved countless lives (obviously not shown in the news because it doesn’t boost ratings) defending ourselves or others, are somewhat evil.

People are so opinionated on things that they have no experience on the subject matter and they pass along false information that can be detrimental, especially on a national or impact people on a global scale. Especially when a large percentage regurgitate misinformation and people actually believe it. So how do you convince such people to truly understand that law abiding citizens that carry a firearm, especially those who are experts, are not the bad people?

To be honest, it’s very difficult.

People can only change their own opinion through their own experiences.  As humans, we are stubborn and set in our ways. Sometimes we are so pigheaded that we can’t open up and listen to other peoples ideas or opinions. That somewhat describes me sometimes. I admit, I am a stubborn person and it takes a lot to convince me on something. I am realist and if it doesn’t jive with my way of thinking or experience, then I just ignore it. This is something I am working on and trying to keep an open mind and truly listen to what people say. I am sure many of us are that way.

The only way people can be convinced that a firearm is a tool for protection is a life changing experience, like being attacked or threatened (don’t do this to change people’s minds). These people who are against self preservation by using a firearm are not realists and will only change their minds when something scares the hell out of them or when their life is in jeopardy. Having a conversation with them will not convince them that carrying a firearm for self defense is a good thing.

I tend to avoid conversations in trying to change people’s minds, even the young minds of teenagers. As we all know, they believe they know everything and the many years of life experiences they have at that time is good enough to be the experts. For those of you who have children will tend to agree, especially if you have teenagers.

People are set in their ways until some life changing event grounds them into reality and then they begin to understand the true world we live in. We are not a civilized society of humans. If we were, there would be no wars, starvation, greed, genocide, torture, murder or people inflicting pain on each other. Until that time comes, we need to truly be aware of our surroundings and the type of world we live in. We must also learn to defend ourselves since there are people out there who don’t blink in taking someone’s life.  If you want to live a longer life in a cruel world, then you need to have tools to protect yourself and those you love.

So if you’re on a mission to change those who are anti-gun to pro-gun, good luck, but don’t get frustrated if they refuse to change their point of view.